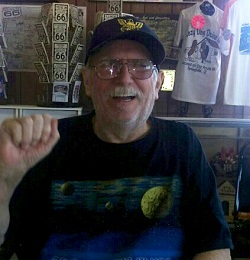 Robert D. Milleville, 71, of Rochester, formerly of Lincoln, passed away on Monday, September 18, 2017 at his residence.
Robert was born on March 8, 1946 in Lincoln, IL, the son of Robert A. and Catherine (King) Milleville.
Surviving Robert are his children Jennifer (Bryon) Feth of Greensboro, North Carolina, Jeffery (Autumn) Milleville of Sevierville, TN, Joshua (Tracy) Milleville of Springfield, IL, Patricia (Jeffery) Frick of Springfield, IL, brother, Donnie (Janet) Milleville of St. Peter, MO and twelve grandchildren.
Robert was preceded in death by parents and three brothers.
Robert was a retired Navy Chief Petty Officer. He was a former commander of VFW post #755 in Springfield. He enjoyed, sponsored and owned sprint racing cars.
Services for Robert will be held at 12:00 P.M. on Friday, September 22, 2017 at Fricke-Calvert-Schrader Funeral Home in Lincoln, with Rev. Mark Peters officiating. Visitation will be from 11:00-12:00 A.M. prior to services. Burial will take place in Zion Cemetery after the services where full military rites will be accorded. Memorial donations may be made in Robert’s name to Paralyzed Veterans of America.
Read All