With three-straight trips to the FCS playoffs in its rearview mirror, the Illinois State football team will begin its journey towards a third Missouri Valley Football Conference title in the past four seasons when the Redbirds begin fall training camp Monday, July 31, at Hancock Stadium. 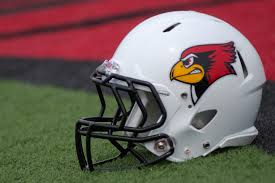 Players will report to the first practice of the fall Monday at 8:30 a.m.
Today is media day at camp.
The Redbirds will practice Monday through Saturday from 8:30-11:30 with Sundays serving as a mandatory off day, before camp officially comes to an end Saturday, Aug. 19, with the annual Red-White Scrimmage at 4 p.m. as part of Redbird Fan Fair.
Illinois State advanced to the FCS Playoffs for the third-consecutive season in 2016, marking the first such streak in program history. The Redbirds return 14 starters in 2017, including eight on defense, as they to extend the playoff streak to four seasons. The Redbirds are led by head coach Brock Spack, who begins his ninth season at the helm of the program (62-35) and has guided the 'Birds to eight winning seasons and four total playoff appearances.
The 2017 squad returns 14 starters (six offense, eight defense) from last year's team and features five players who were selected to the MVFC preseason team.
Illinois State opens the 2017 season at Hancock Stadium Saturday, Sept. 2, against Butler at 6:30 p.m.
[Story courtesy of goredbirds.com]
Read All