If you’ve attended in the past you know what to expect. But if you’ve not yet experienced this unique celebration of history, harvest, heritage, and hospitality here’s what could be awaiting you this year:

Dozens of crafters and artisans and more than 200 dealers offering an array of crafts, art, antiques, and more

Plus pony rides, a petting zoo, a Victorian-era magician, clog dancers, free musical entertainment, and our very own Pigs on Parade contest

Wear comfortable shoes and plan to spend the day!

Free admission to the farm equipment and railroad exhibit buildings.

Tram and bus transportation to and from the museum grounds is readily available for a small fee.

It wasn't by much but the 54th edition of the Apple n' Pork Festival was another record-setter.

Just by about 300 or 400 people the 2022 Festival again drew over 103,000 people to Clinton. Chief Ben Lowers says everyone felt like the Saturday crowd was fantastic and the Sunday crowd started late but they came out in force as the afternoon went on.

Tours of the Homestead returned in 2022 after a challenge finding enough volunteers in '21 in addition to working on the porches going on. Director of the Museum, Joey Long indicates a trend that was beginning before COVID was younger people interested in the home and that continued as tours resumed this fall.

The Apple n' Pork Festival at its core is a fundraiser for the CH Moore Homestead and DeWitt County Museum. Long indicates 54 years ago the mansion was in less than desirable condition and has greatly been improved over the years.

A very family-like atmosphere is how Chief Lowers describes the Apple n' Pork Festival and believes it's the traditional nature of the crafts, the flea market, and the food that brings out people that are traditionally not going to cause problems.

Keep it to Regional Radio and dewittdailynews.com over the next several weeks as we highlight the conversations from the 54th annual Apple n' Pork Festival from WHOW's live coverage of the weekend. 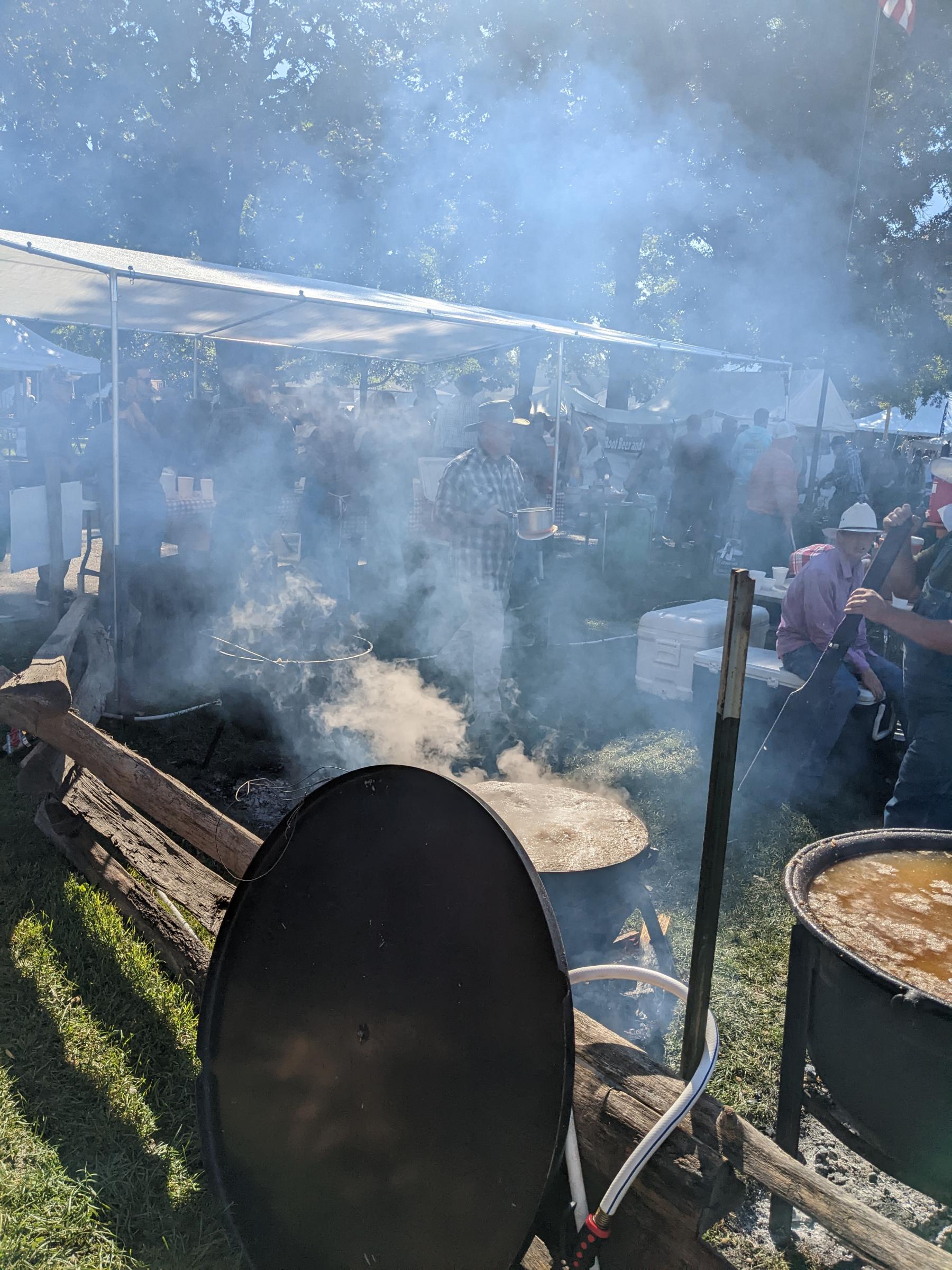 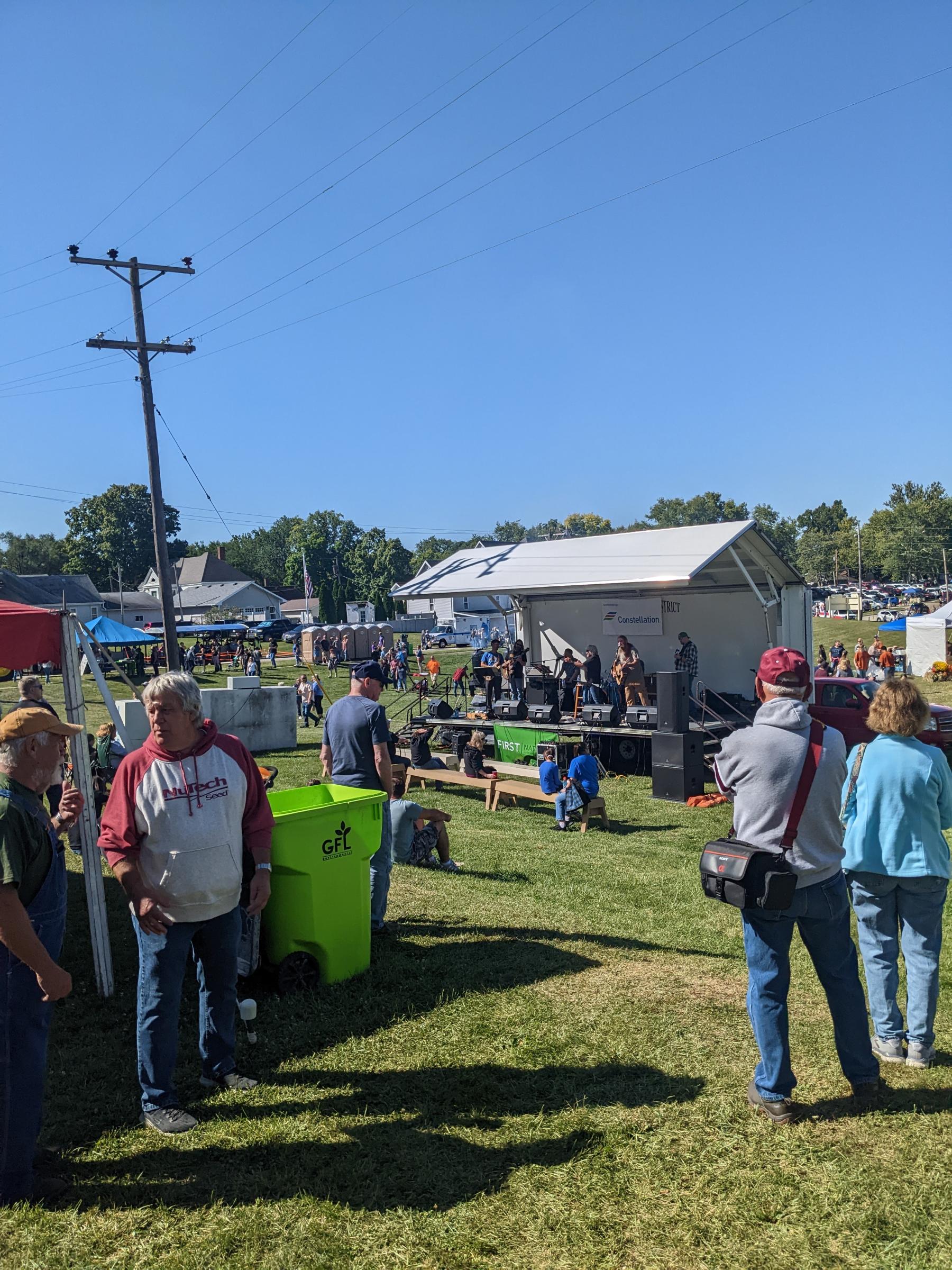 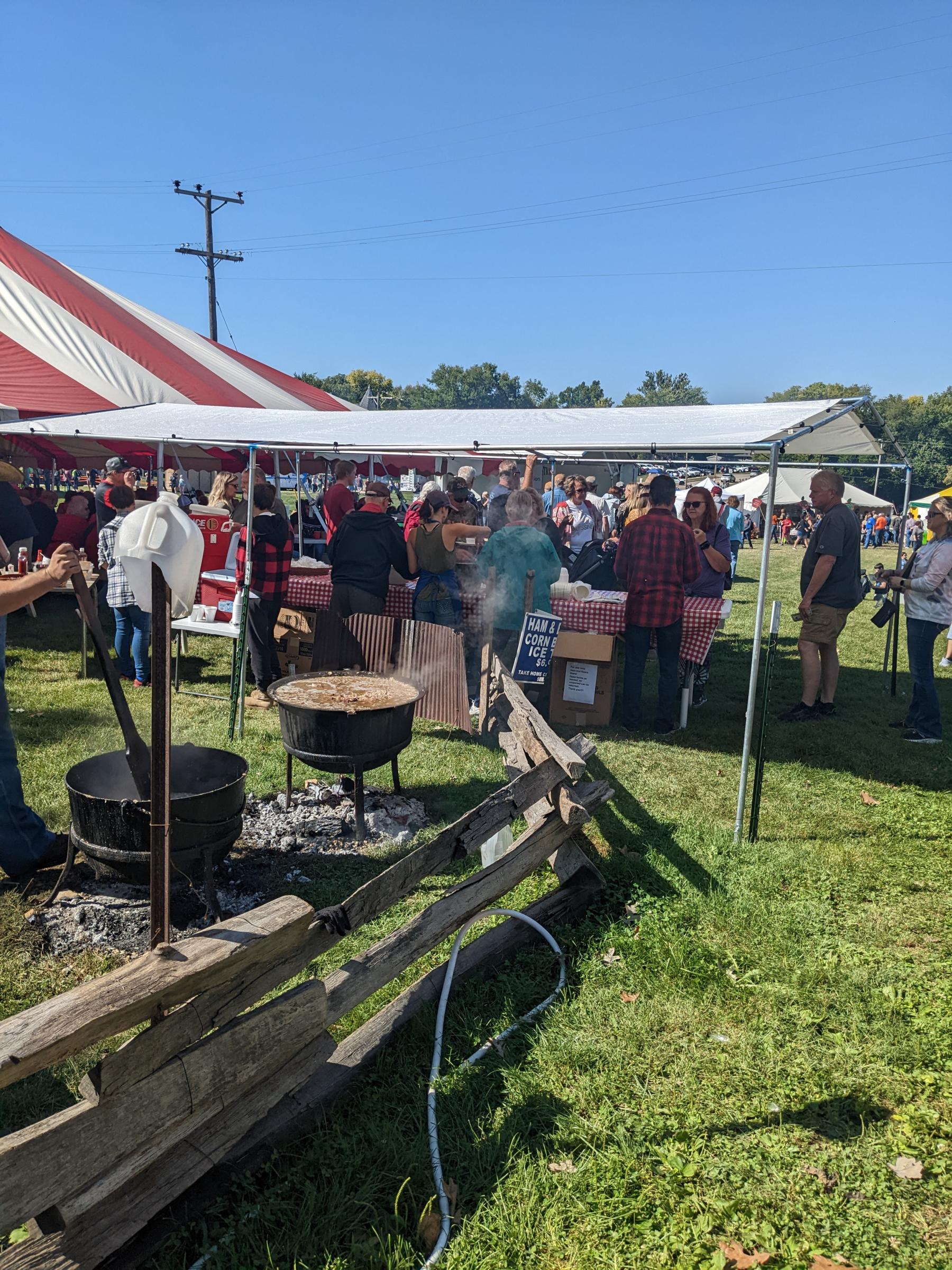 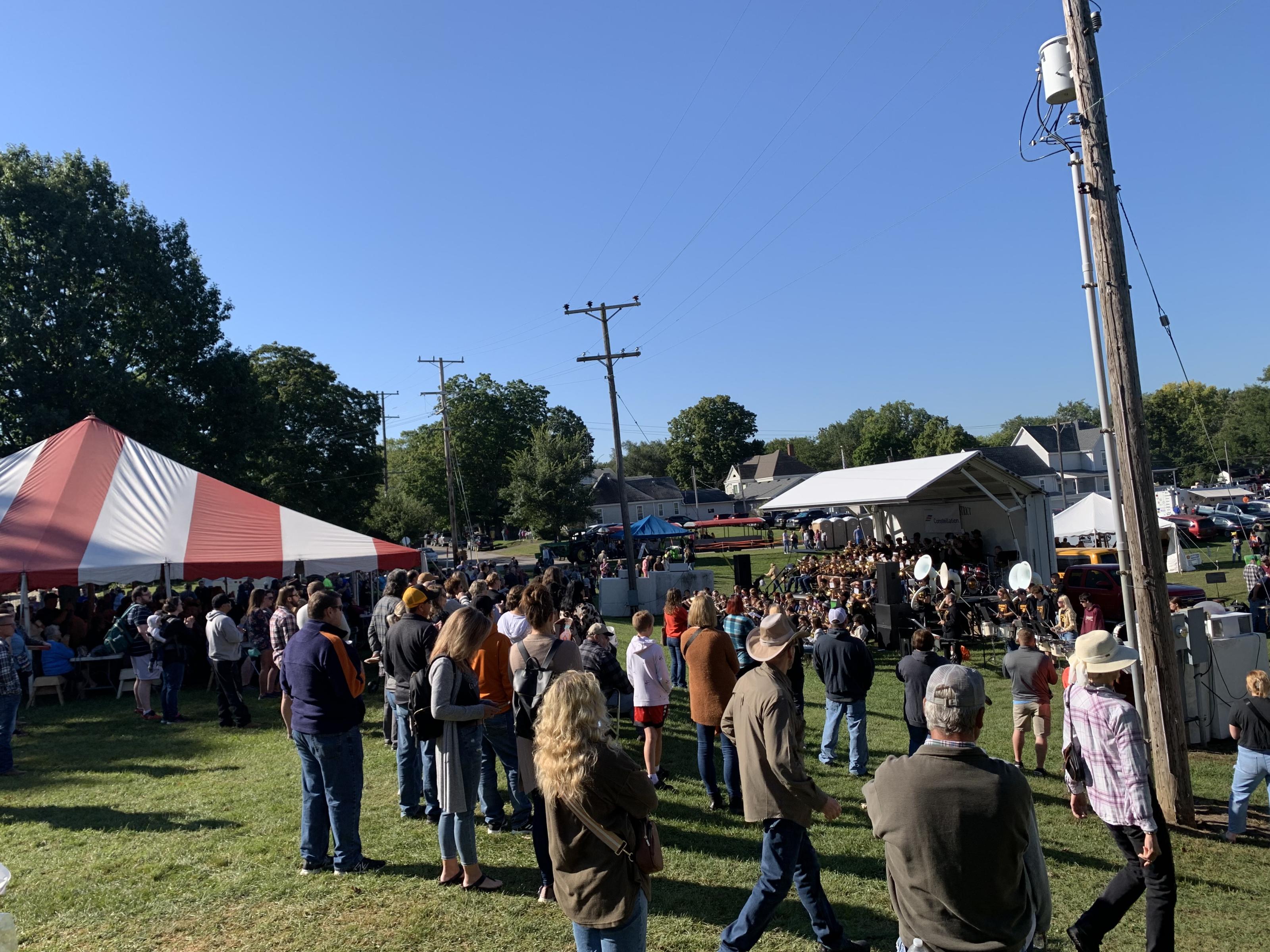 The annual Apple n' Pork Festival as we know it today have very humble beginnings when it started 54 years ago.

Long says she remembers as a child there being a small flea market and it growing fairly quickly. She notes at the time the festival was started, there were grassroots efforts across the country to start festivals to restore historic landmarks. Unfortunately, not all of these festivals have had the same longevity.

The longevity of Apple n' Pork Long believes is the appreciation of the festival sticking to traditions. She adds while the festival has grown it also has stayed the same.

The Apple n' Pork Festival is here and organizers of the 53rd edition are reporting positive news as it relates to challenges like supply chains and inflation.

Terry Ferguson has been on the Homestead Board since the 80s and organizes the brat barn. He points out they had very few issues with the availability of the food they needed. While the price was a bit higher than last year, he didn't see the merit in raising prices by a quarter or two and making their volunteers deal with handing out change.

Last year's Apple n' Pork Festival was a banner year for so many groups, if not all the groups, on the grounds of the CH Moore Homestead. Rather than plan for another year like it, Ferguson says they are keeping their order for brats the same.

The Festival runs today and tomorrow in Clinton.

The Apple n' Pork Festival this weekend will welcome to the CH Moore Homestead Grounds the folks from Encore Development Services.

She isn't sure if it's a return to the Homestead or a first-time affair, but regardless, Encore Developmental Services Executive Director Stephanie Coonce told Regional Radio Thursday on the WHOW Morning Show they are excited to just be on the grounds this weekend.

Coonce explains their clients are very excited and they have found that even family members of their staff are going to be willing to help.

According to Coonce, the funds raised this weekend will go to their day services training program which seeks to give clients the skills they need to get a job and maintain employment.

Coonce reminds the lemon shake-ups they'll be serving will be where the former VFW stand was on the south side of the Homestead grounds on the front lawn against Woodlawn Street.

The Apple n' Pork Festival is a community affair to the point the high school and its student-athletes get in on the action.

Athletic Director Matt Koepel indicates once again, the 10 programs will help park cars at the high school this weekend with the money going into those ten programs plus the athletic boosters.

According to Koepel, whatever is made gets divided 11 ways and then goes into accounts for the students for things like meals after games on long road trips or awards at the end of the season. He says it is for the things that make the activities fun.

Last year was a banner year for parking vehicles. Koepel asks those parking at the high school to be patient with the kids. He feels they are working hard and with thousands of people going to that part of the community, there are a lot of people to get in and out of that lot.

The Clinton community sees an exponential increase each year in traffic and population during the Apple n' Pork Festival. Along with this in turn comes the need for medical and police attention.

DeWitt County CENCOM Coordinator Tony Harris notes they will have two dispatchers working with a third on standby to accommodate for an influx of calls if need be. He estimates they receive over 1,000 a day.

When asked about memorable instances over the years, Harris commented about a time when they received an influx of medical calls during the same time.

Harris reminds anyone on the museum grounds requiring assistance to stop by the CENCOM mobile command center or call 9-1-1.

The Apple n' Pork Festival is here and as thousands converge on the community this weekend, local authorities are sending out their yearly reminders of street closures, rules on the CH Moore Homestead grounds, and much more.

Police Chief Ben Lowers reminds of the street closures that start just off Clinton square and go all the way down Center Street to Woodlawn Street.

With thousands of visitors converging on Clinton this weekend, Chief Lowers says the biggest issue they encounter is the traffic. He asks those in the community and those coming to the community to simply be patient and take advantage of the legal parking opportunities all over the community.

A new wrinkle to the closure of Center Street in Clinton over the last few festivals has been the legalization of golf carts and Chief Lowers reminds those are not allowed on Center Street.

Animals have not ever been allowed on the Museum lawn during the Apple n' Pork Festival and Chief Lowers says in recent years, they have been more aggressive in asking people to not have pets on the grounds as it is a request of the Homestead.

The Apple n' Pork Festival is this Saturday and Sunday in Clinton.

We'll have continuing coverage leading up, during, and well after the festival concludes on Sunday on Regional Radio.

Come Saturday in Clinton, thousands of visitors will converge on the community for the annual Apple n' Pork Festival.

Director of the CH Moore Homestead Joey Long believes the festival is a special opportunity to take a step back in time and enjoy the charm of the past.

Among the traditions of the Apple n' Pork Festival is the meal grinding, the antique tractor show, and the flea market, which Long says there is a lot of interest in this year.

Long is excited to have tours of the mansion back this year. Last year they did not have enough volunteers to cover the weekend and so they had to close the museum down.

We'll have continuing coverage leading up to, during, and well after the Apple n' Pork Festival on Regional Radio.

The Apple n' Pork Festival is this Saturday and Sunday, Sept. 24-25.

We're just a few weekends away from the annual Apple n' Pork Festival and organizers are about ready for the biggest weekend of the year in Clinton.

Joey Long is the executive director of the CH Moore Homestead and says the musical entertainment this year is again sponsored by Exelon and there will be more local acts as a part of this year's lineup.

Long points anyone wanting more information about the Apple n' Pork Festival to follow the Facebook page by the same name.

Be A Sponsor of the
Clinton Apple and Pork Festival!